Currency War between Thailand and Japan: Yen vs. Baht 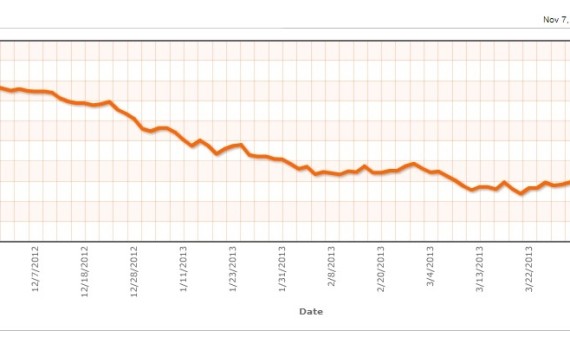 Thailand is a known hub for car manufacturers, especially of Japan made vehicles. The country provides a sound business environment for leading Japanese carmakers such as Toyota Motor Corp., and Nissan Motor Corp. Official data showed that Thailand bought 54 percent of auto components from Japan in 2012, making the importers “too pleased with the situation”, according to Thai Finance Minister Kittiratt Na-Ranong. This came out in January 24, 2013 after the Japanese Prime Minister Shinzo Abe’s push for “bold monetary easing” to revive and boost their economy, which sent the Japanese yen to a 2 1/2 –year low against the dollar.

From this turn of event, the Thailand Baht is seen to benefit from it if a stronger export performance on a revival in demand for Japanese products will show in the first quarter of 2013. This observation was made by Jun Trinidad, a Manila-based Citigroup Inc., economist in a telephone interview on January 30, 2013.

This year, the Thai Baht gained strength against the US Dollar by 2.8 percent – the best performance among 11 most-traded Asian currencies. This is an absolute proof of Thailand’s economy recovering from the country’s worst floods in almost seven decades. The 6.8 percent slide of the Yen prompted a 2 percent and 1.7 percent declines in the Korean Won and Taiwan Dollar as competition between Sony Corp. and Toyota versus South Korea’s Samsung Electronics Co. and Hyundai Motor Corp., as well as Taiwan’s HTC Corp.

According to Trinidad, “When the yen depreciates, there is a tendency for the market to take the view that the Taiwan dollar or the South Korean Won will have to move in line.” This makes Thailand a special case since much of the Japanese production for mass-assembly type vehicles is in the Kingdom. 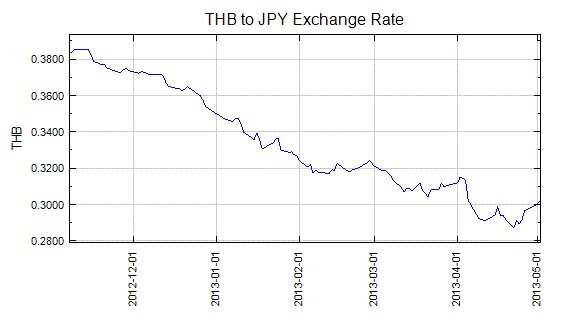 Resulting from the monetary easing in Japan has dragged the yen lower while the other Asian currencies have seen positive indications of getting stronger against the Japanese yen. Ha Sung Keun, a board member of the Bank of Korea said in January 28 that a global currency war seems to be brewing in the Asian region. The policy makers of Taiwan expressed their plan to step into the foreign exchange market as the Taiwan dollar rose 5 percent against the yen this year. This would necessitate the Japanese government to spend 10.3 trillion yen or $112 billion to drive a recovery.

In Thailand, Japanese companies accounted for 64 percent of the projects approved by the Thai Board of Investment in 2012. That equates to 348 billion Baht or $11.7 billion, according to the Japan External Trade Organization or JETRO. In 2011, Japanese foreign investment in Thailand totaled $159 billion or a 57 percent share among the Japanese companies. So far, the appreciating Thai baht against the Japanese currency has not received any complaints from Japanese companies in Thailand. According to Yoichi Yajima, a representative of the business support center in Thailand expressed positive outlook for the ongoing strengthening of the Thai baht saying, “A stronger baht also helps to contain inflation, and that will help limit the costs for companies amid rising labor costs.” This is in light of the recent increase in Thai’s minimum wage throughout the country, which added to stimulus measures for boosting domestic demand and reducing reliance on exports for growth.

The yen’s weakness is apparently benefiting Thailand in terms of having cheaper machinery imports when wages have gone up. For many analysts, this situation brings a balance in Thailand’s business and economic activities.

On the other hand, the Thai baht’s gain to a 17-month high in January makes it expensive and exporters (rice producers) will be hurt. Export growth rate is slowed by 14 percent in December from 27 percent the month before according to a central bank report on January 31.

The falling yen is good for the Thai economy and business activities as automakers are regaining optimism and “beginning to see the light” with the Japanese yen. In the same way, the declining yen may help Japanese companies boost their earnings to allow them to allocate funds for overseas expansion, according to Koji Fukaya, President of Currency Research and Consulting Company Office Fukaya in Tokyo. Japan’s shipments to Thailand increased 17 percent equated to 3.49 trillion yen in 2012 and this was the biggest increase among Asian nations. On the other hand, exports to the region overall declined 5 percent according to official data.