An alarming concern expressed by the Bank of Thailand about the recent increasing trend in consumer loans has caused the media and some financial experts to analyze and assess the current situations to determine if such concerns have any ground and basis.

The Bank of Thailand expressed their concern that if such trend is not reversed, the country could be in another home-grown financial crisis sooner than anyone expects. Some questions have to be asked and some situations have to be analyzed in order to determine if such observation by the premier financial institution in Thailand carries any weight.

Has there been an unusual surge in loans compared to national revenue?

This question is posed to find out if there is a bubble forming with the rise in consumer loans. Experts have found out that in the last two years, domestic lending has evidently grown higher than the nominal GDP (gross domestic product) and consumption. This signifies a boom in credit activities above real fundamentals. And if compared with the conditions that were present in the previous domestic financial crises – 1983-1984 and 1987 – 1997, it would show that the gap between the loan growth and the GDP is similar to what existed in periods before the 2 major financial crises, no matter if the gap is smaller than it was in 1984 and 1997 crises.

Financial experts can compute the ratio of Thailand’s consumer loans per capita which is what caused the Bank of Thailand’s concern, to GDP per capita. This ratio should be compared with neighboring and industrialized countries. If the ratio is high and increasing by international standards, it is indicative of an alarming sign of bubble forming.

Results of such computations showed that following international standards, Thailand’s level of consumer loans against the ability to generate revenue is still within acceptable level. However, authorities should note that if the increasing trend of consumer loans continues, this could be a serious cause of concern. 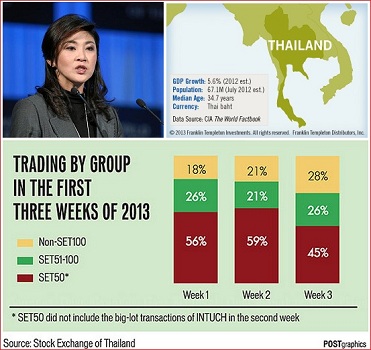 What possible triggers threaten to burst the bubble?

As tricky as the question is, two scenarios are presented as a critical thinking form of experiment. Two scenarios / mechanisms can trigger bursting of a lending bubble. The first scenario is where the borrower’s income to pay monthly installments and/or principal, is reduced. This can be caused by a global crisis that leads Thai exports to go down subsequently causing deterioration of domestic economy, a failure in government policy (government abolishing rice-pledging scheme), and on the expenditure side, an increased inflation rate resulting from the unexpected revival in the global economy or liquidity injection by global central banks.

The second scenario is an increase in lending costs, or the interest expense. In the event that a surge in inflation happens, the US Federal Reserve would have to hike the Fed Fund Rate, which would eventually lead to a surge in the BOT’s policy rate and Thailand’s commercial bank lending rates. Under these two scenarios, a bubble burst could be imminent. If you need financial advisory, it is better to seek professional help to better understand the economy and make the right decisions. You can click here to see who can help you.

How many years left before the bubble bursts?

From the computations of the financial experts, it showed that the loan-to-GDP ratio based on a 30 year horizon, is similar to that of 1993, four years before the 1997 crisis. And although the economic environment and situation are different from that of 1993, it is possible that the next crisis is hovering Thailand in the next two to four years if this consumer loan growth continues to increase above the level of income generated in Thailand.

From such analysis, the following conclusions are alluded to: