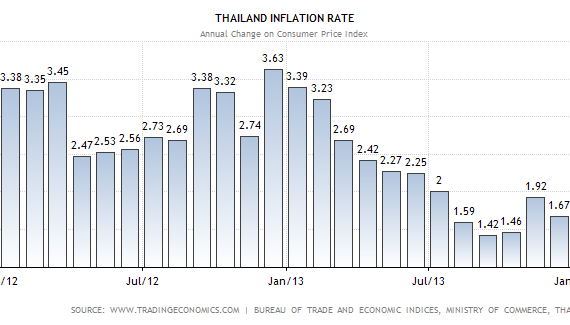 GNP or Gross National Product measures the market value of all products and services produced during a certain period of time by labor and property supplied by the residents of a country. Gross National Product (GNP) is equivalent to the Gross Domestic Product (GDP) when reduced by income earned within the domestic economy by overseas residents and expanded by income earned by residents from overseas investments.

In terms of GDP, according to the Office of the National Economic and Social Development Board (NESDB), Thailand has a GDP of 11.375 trillion Baht or the equivalent US$ 366 billion. The Thai economy grew by 6.5%. It is expected to grow in the range of 3.8 to 4.3 percent.

During the first half of 2013, the Thai economy grew by 4.1 percent year on year. After seasonally adjusted, the Thai GDP contracted by 1.7 percent and 0.3 percent in the first and second quarters of 2013, respectively, Technically speaking, said contraction in two consecutive quarters mean that the Thai economy is now in recession.

In Southeast Asia, Thailand is the second largest economy, following Indonesia. The per capita GDP in 2012 was relatively low at US$5,390. Thailand ranks in the middle of per-capita GDP, after Singapore, Brunei and Malaysia. In 2012, the second largest international reserve was held by Thailand at $171.2 billion.

The World Bank recognizes Thailand as one of the great development success stories in social and development indicators. The percentage of people below the national poverty line decreased from 65.26 percent in 1988 to 13.15 percent in 2011, according to the NESDBs new poverty baseline. The first quarter of 2013 showed an unemployment rate at 0.7 percent – the fourth lowest unemployment rate in the world.