How Did The Increase In Minimum Wage Affect The Consumer Purchasing Power? 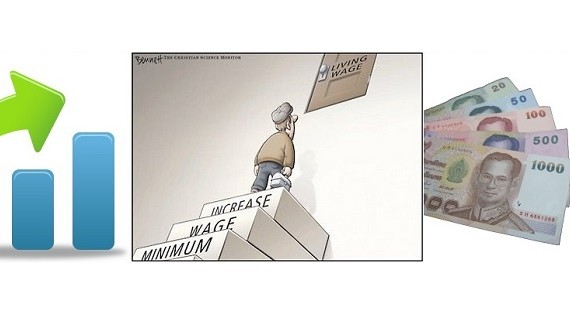 While industry players see the minimum wage hike in Thailand as burdening to most employers, the Thai government believes that the 300 Baht daily minimum wage would have positive effects to the country’s economy in the long run. This refers to the full and mandatory implementation of the minimum wage increase across Thailand effective January 1, 2013. This has been piloted in seven provinces since May 1, 2012. And beginning 2013, the government directed all employees to be paid at least 300 Baht daily wage throughout the country.

The minimum wage move was approved through a Cabinet resolution which sets the 300 Baht daily minimum wage to remain in all provinces nationwide throughout 2014 and 2015. Only if the Thai economy faces severe volatility affecting the workers’ livelihood will the Wage Committee consider revising the set minimum wage in 2014 and 2015. Here is an article that speaks about how the increase in minimum wage affect Thailand’s labor force.

The increase in minimum wage of workers is believed to have increased the purchasing power of the general public and helped workers cope with the rising costs of living. With more income received by the workers, buying and selling of consumer goods are likely to improve as well. And while the wage increase have adversely affected small and medium-sized businesses like a typical accounting firm Phuket, the government offered relief by approving the reduction of corporate income tax from 30% down to 23% in 2012.

Accompanying the wage increase is the SMEs fearing that they could not sustain their operations with the new wage index and this might result to worker’s layoff if not businesses downsizing or totally closing down. Government stimulus measures aimed at helping companies cope with the wage increase order include incentives other than the reduced corporate income tax.

For the government, the labor unions and employees, the increased income for workers is hoped to boost consumption and force productivity gains and innovations. And while the wage increase is likely to boost inflation, it will also improve the purchasing power of consumers and essentially help bolster economic growth. The increased minimum wage has allowed lower-income families to consume lifting consumer spending. And since the wage hike, it’s a trend that has been observed across the region.  Better paid workers with more income than before will likely buy goods and assets or invest in their families’ education and life quality.  In this sense, Thailand’s domestic demand and real estate sales can be boosted by the increased daily wage.